skip to main | skip to sidebar

Part 1: With piety for the Deity 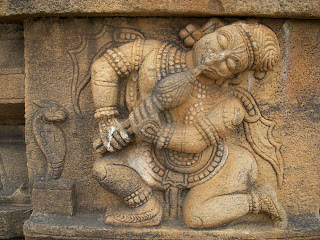 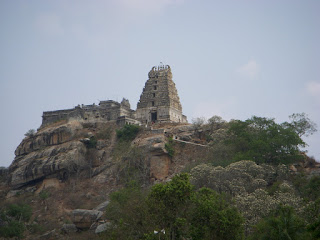 In an earlier life, repetitive tourism (in whatever guise: temples, tirth yatra or just a getaway) would be good cause for loud and insistent protests, to my parents lasting aggravation. Post marriage has resulted in a surprising complacency and tolerance that I would not have believed myself of conjuring (though there might be differing opinions on this!). Ergo, we found ourselves cruising along on Mysore road for the second time in as many months. Though its been a couple of years now, we cannot get over our luck at being blessed with this highway: shiny clean and even enough to eat off. As battered as we were by our road trips to South Kanara, we treated this one with the normal emotions Indians reserve when treated to a motorable highway: unselfconscious delight and surprise.
This trip was hastily planned with frantic calls to resorts and plenty of second guessing and rethinking to boot. With a friend’s recommendation, we settled on the Royal Orchid otel Hotel ckhoHotel at Brindavan Garden KRS. Brindavan gardens that provided the colour to a hundred tacky wet-sari songs in all possible vernacular tongues. We had an early start, and the road was a dream as promised. We cruised along at a good clip, particularly relishing the signs that invited and bid us goodbye with all passing towns: “welcome to Silk City Ramnagaram”, “Thank you visit again-Sugar City Mandya” and “Gombegala Ooru Channapatna”.
As one leaves Mandya, a pointy little sign modestly directs the diffident driver - Melkote. We’ve seen the sign on our many trips to Mangalore, longingly craning our necks to follow the road as far as the eye could see; and reluctantly put it off for other vacations. This time as the sign approached, the same though raced through our heads and we joyfully took the turn the sign obligingly pointed toward. It’s a picturesque drive, with fantastically shaped rocks and boulders precariously balanced end on end. The rampart of neat hillocks has its rugged beauty, even as the treeless baked brown slopes indicated a systematic deforestation.
Melkote rests on a hill, one of many that stand sentinel beside it. As we entered the town, we were immediately struck by how clean everything was! There was none of the rubble that is a sad artefact of other busy overcrowded temple towns. For a little bit of background history, the town was established in the 10th century by the Vaishnava saint Ramanujacharya. However, it is said that the temple predates the saint, with lithic records proposing a Tamil influence and Vaishn 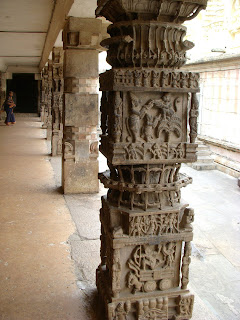 ava worship in this area. Ramanujacharya’s disciples followed the saint, and soon the town became an important centre of Srivaishnavism. The main temple dedicated to Lord Cheluvanarayana Swami stands right in the town centre: a square low building propped up by a legion of pillars. It was modest and altogether much simpler that I had imagined, although going by the era and history I suppose this is consistent. For prayers before the deity, we were pushed into an orderly queue by thick hemp ropes, and the formalities were completed quickly enough. We took a walk around the temple and in sharp contrast to the unadorned functional pillars outside, the ones in here took our breath away. Chariots, voluptuous apsaras, soldiers with bows and arrows poised, battle scenes and deities narrated stories of a bygone era. Intricately carved with painstaking detail, we marvelled at the stonemasons of the time. A thousand years ago, they must have been privy to only the most rudimentary tools, and yet to masterfully create such a thing of beauty completely awed us. I did sneak a photo, though it invited a sharp rebuke from one of the priests. Our noses lead us to the
puliyogare stall outside the temple and we just had to dig into Melkot 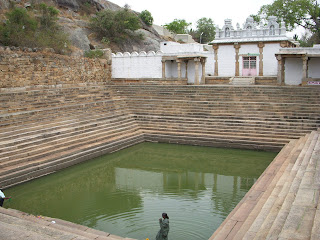 e’s most famous export! Spicy, tangy and delicious, we gorged on a big bowl each and it was everything promised by puliyogare connoisseurs! Not sated by that, we armed ourselves with packets more of the mix to carry home and replicate.
A short climb up the road from the temple, we came across the “Akka-tangiyara Kola”. These are built along the lines of ‘kalyanis’ or temple tanks with water all year round. Legend goes that the older of the sisters wanted to build the tanks and enlisted her younger sister’s help. However the younger one was reluctant about the scheme, for reasons lost in time. Therefore of the two tanks, one is filled with clear water and the other brackish, testament to the younger sister’s reluctance.
Down the hill from the temple is the immensely huge kalyani of the Cheluvanarayana Swami and Yoga Narasimha temples. The kalyani is surrounded by mantaps supported by intricately carved pillars which have hosted a dozen romantic song-and-dance silver screen routines. The day we visited was no exception. Tinny music and the choreographer’s megaphone echoed across the water as Shivrajkumar and his tireless extras gyrated incongruously, breaking the solitude and serenity of the place.
The Y 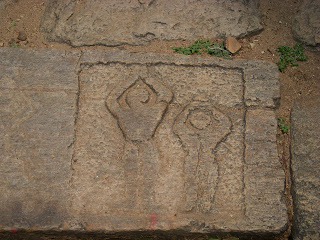 oganarasimha temple overlooks the kalyani from its lofty perch and beckoned us for a good hearty climb up the steps. We started off enthusiastically enough, extolling the virtues of a good weekend hike while furtively assessing each other’s energy levels. The granite steps along the way are carved off-and-on with figurines of men and women with their arms raised in pious surrender as they trudged up the hill. I guess these were meant to infuse the weary traveller with renewed vigour as he lost heart gazing up at the temple that seemed just a little bit further with each step! The monkeys along the way provided a bit of comic relief, as did the goats that pranced nonchalantly up the steps and bleated sneeringly at us. Once we did reach the top the view was breathtaking, although the barrenness of the surrounding hills disturbed me not a little. The temple itself was simple, small, with a wraparound terrace and view that encompassed the whole district. Not surprisingly, the Prasad was what else, puliyogare! Peering inside a small stone built room off the temple, we saw an old man in a dhoti toiling away at a grinding stone. I suppose this is where this heavenly mix came from with its perfect blend of spice, tang, a slight hint of sweet and the crunchy roast peanuts. We gorged on handfuls of the stuff and the price (Rs. 10/handful) for weird reasons I don’t want to probe, had to be left on the doorstep of the room. We descended.
Tick for Melkote, and I take back with me a little piety and a half year’s supply of puliyogare!
Posted by Malavika Karthik at 03:13

Nice post Malavika. I feel as if I had gone there with you :) and can almost taste the Puliyogare.